Last Friday, a first blanket of snow covered Beijing for a few hours. I was safely tucked away, out of the cold, in a classroom on the third floor, overlooking the university’s playing fields. The more curious of the class peered out of the windows at the heavy dollops of snow coming down past the silvery trees still displaying their yellow leaves. It seemed too early for snow. And it was. The snow began after I started teaching that morning, and had melted by lunchtime with no sign of the powdery sprinkling but the remaining chill.

On Sunday morning, the snow returned in earnest. Hauling ourselves out of bed and into the shower before a long working Sunday and after a long working Saturday, we didn’t notice it until moments before we left the house. The whiteness shone in at us as the morning light bounced of whitened hutong roofs.

Throughout the day, my usual brisk walk to keep out the cold slowed gradually to a careful trudge, each short journey between subway station and destination getting more treacherous as the thawed, slushy snow refroze to form a layer of ice underfoot.

Across the city, pavements were covered in green slush puppy – apple flavour? – as the chlorophyll from unturned leaves crushed underfoot mingled with the white snow. I knew Beijing snow ought to be dirty, but green? This wintry snap was so sudden that most of the trees were still covered in hardy green leaves, all forced to fall with the stinging cold. Workers lined streets wielding straw brooms and spades, gathering snow and freshly dropped foliage into little piles along sidewalks. 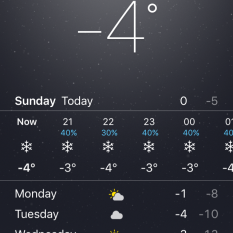 It was bitingly cold but I knew the later I stayed out the colder it would get. I managed to curl up in bed before 10pm – which is a first in months – for a deep, snow-induced 12-hour sleep.

Monday was sunny. The temperature was not high but the brilliant blue sky cheered my otherwise low spirits. I had explained in Chinese just the day before why autumn is my favourite season. In the UK, there are days when the sun shines, and the sky is blue but the air is frozen. Plumes of dragon’s breath unfold on the walk to school, as I eat a newly ripe apple plucked straight from the tree before leaving home – I remember those days as clear as the sky itself.

I donned my fur-lined industrial-weight stomping boots for the first time this winter (I’m so glad I braved China’s August heat wearing those on first arrival in Beijing, they are 100% necessary if I want my toes to survive Beijing winters) and sung as I walked to my dental appointment.

Unable to talk (let alone sing) on my walk home, I was no less grateful for the huge coat I bought last February. I hadn’t needed it (or hadn’t realised I needed it) until after a late-January visit to Xi’an, Shaanxi Province. That week of outside activities in my woollen, double-breasted, mens houndstooth jacket was agonisingly cold. But last year, apparently, was much warmer than this. The blue skies we had last year confute the cutting chill of normal Chinese winters. Climate change finally appearing manifest, last year’s was a deceptively warm hoax of a winter.

And now, the thin snow is falling once again. Though it comes down in sparse little flurries, it is constant and soon covers the ground in a fine powder. The eerie white light spurs me on. The trees directly outside my north-facing windows are completely bare and leaf-free now. This is the freshest light I have seen in weeks.

As I write, I know the playground opposite is about to be flooded by children, who may or may not run around and play in the white cold a little while, depending on how strict (or cold) their waiting (grand)parents are. Perhaps the blanket will remain where it lies, undisturbed until tomorrow’s school day begins afresh, perhaps it will thaw and refreeze, rendering the play area unusable and keeping the children indoors all day as the rain used to do in my school – we had specific games especially for ‘wet play’ days.

Might their Headmaster organise a snowball fight? Mr Watkins, our Headteacher and everybody’s favourite, would announce the scheduled lunchtime fight at the morning’s school assembly. Year 4 and 7 against years 5 and 6, with respective teachers joining their classes. Mr Watkins was a devoted cricket player, who, during Monday assemblies in summer months, would recount stories of his Sunday afternoon matches – I was one of the few students on our cricket team, and therefore lucky enough to understand his love of the sport – so Mr Watkins had the best aim of all the teachers, and you’d always want him on your side for the snowball fights.

Somehow I doubt that is a popular policy at Chinese schools. I just hope the local kids get to enjoy the winter’s snow as much as I did as a child (and still do), and aren’t kept indoors by their guardians for fear of their having too much fun.

A feminist anthropologist exploring the realities of culture, gender, and sexuality in contemporary Asia

Find what you’re looking for: