What’s a girl to do the night before taking an international flight to an shiny metropolitan city she’s never been to before? Other than prepare for the morning’s classes, remember to water the plants, write a to-do list with a whiteboard propped on her lap… Why, dye her hair of course (and pack, packing should definitely be on that list).

Today, I fly to Hong Kong. I have never been there before. I am crashing my boyfriend’s business trip… well, only a little. Girlfriends are invited. He runs the business with his brother, which means this is also a family trip. In fact, it is a first-time-meeting-his-brother trip. So it’s a big deal. This one is important to me, so his brother (and his girlfriend) are too.

So, last night, I decided to dye my hair. It’s been on my to-do list for a long while. Much longer than it has actually been physically possible – I asked my Mother to bring me a box of dye when she visited in May. She did not bring it. So I asked my siblings to bring it when they visited in July. They did not bring it. My Father had convinced all three of them that a box of greenish powder, even when clearly marked, looked (and smelled) too much like drugs to assume a reasonable degree of safety during a first visit to China. I can understand that fear – you wouldn’t want to be arrested in China. But China is not UAE, where people have been arrested for a couple of poppy seeds stuck in their beard, or traces of weed on the bottom of their shoe.

So, eventually, I persuaded Mum to send me a box. I received it in late August, and promptly left the country. I often thought about using it, thought better of it (given the amount of time I had on my hands) and left it for later. But once the Hong Kong trip was booked, I promised myself to use that little red box before I flew. So, you see, I had no choice.

Most people I know would likely view me as a bit of a hippy… I wear a lot of unusual clothes. I’ve spent most of my life as a vegetarian. I tend not to shave my legs (and then write about it, as you may well have read in Does having leg hair make me less of a woman?). I’m 100% open about my leftist, feminist, pro-equality, pro-choice political views. I like getting into heated debates on any topic. I protest against things I disagree with and show support for movements I believe in. I’m also pretty vocal about being “a bit of a hippy.” So whenever I mention that I dye my hair, friends tend to think it at odds with my personality.

Do hippies dye their hair?

Well, yes. But I use henna. Henna is a 100% non-toxic, non-damaging way of colouring hair. It’s what Indian and Middle Eastern women use to draw semi-permanent tattoos on their hands for weddings and other special occasions. Many people use henna for its conditioning properties, not for colouring at all. It is incredibly cheap – £4 a box in a shop called Head in the Clouds, where I ask my family members to buy it for me (because I haven’t yet found it in Beijing) – which, with its long-term effects on your hair, makes it great value for money. 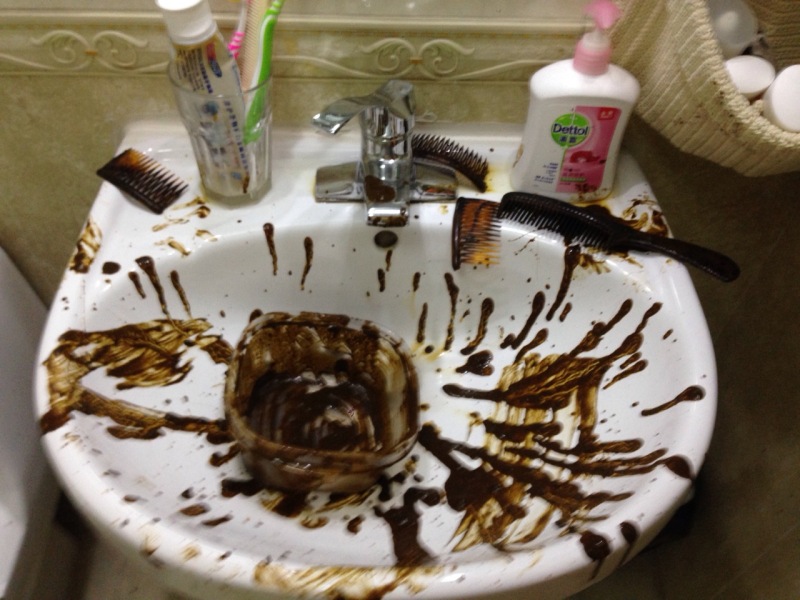 When you use henna, you mix a greenish powder with warm water, mix it up into a thick, mud-like substance, and whack it into damp hair. It generally tends to get everywhere, when I do it… which is why it’s great to have a helper when you can find one. I have had my sister, brother, two housemates, a fellow hitch-hiker and a boyfriend help me henna my hair. It will probably still get everywhere, no matter how many people stand around the room as you plaster mud into your locks. So, while its nigh on impossible to avoid getting brownish clumps all over your bathroom, it is pretty important to protect your skin (unless you want your hands, neck, face, chest, arms, or anywhere that it remains for more than a few minutes to turn a glowing shade of orange for at least day or two), particularly your hands. So, always wear gloves.

So last night, once I had emptied my spicy green powder into an empty old tupperware box and poured warm water onto it, I searched for those gloves… you know, because I’m always 100% prepared for this process. I found one glove. I found one yellow glove stuck to the bottom of my cleaning cupboard under the kitchen sink. This little yellow glove had decided to stick not only to the cupboard floor, but also to stick to itself. Parting the index finger from the palm of the glove was more than this little marigold glove could handle. I tore a hole, ran to fetch some tape from my draw of teaching supplies, taped it up using my teeth and left hand (I’m right-handed, and not remotely ambidextrous) and proceeded to mix my box of mudpie mixture with my gloved right hand. Taping it totally worked. For about 30 seconds. Feeling henna seep into my skin, I ran to the only place I could imagine having an extra pair of kitchen gloves (if only henna packets came with a pair of gloves) – the space under my balcony table, where a pink basket resides. A pink basket a friend of mine left me when she returned to America in July. A pink basket brimming with cleaning-related paraphernalia. A pink basket with an equally beautiful pair of pink gloves lurking at the bottom, saved specially for when I would need them most (who wears gloves for actual cleaning? I mean, really?!). Thanks, my love.

Though the instructions say 30 minutes is enough, I leave it as long as I possibly can stand to endure having to wipe away the irregular drips down my forehead and along my jawbone. I usually tie a towel around my head, on top of the two plastic bags I fashion into turban-style protective headgear, and then wear a tea-towel around my neck to wipe off any drips. (Henna is very easy to wash out, so getting it onto clothing and towels is not an issue, but it will dye skin for days.) Then I just wash my hair as normal, which sometimes takes an double shampooing and ALWAYS gets even more muddy-looking henna ALL over the bathroom. After that, treat it as you would normally treat your hair (well, maybe smell it about 50% more than usual) and voila! You wake up with beautiful, thoroughly conditioned, ever-so-slightly reddish hair. Just in time for that flight to Hong Kong.